The LinkedIn list recognizes companies in the U.S. where people most want to work. And this year, Johnson & Johnson is also featured on the Brazil, Japan and UK lists.
By Johnson & Johnson06 November, 2020

Johnson & Johnson not only strives to provide its employees with industry-leading benefits—such as global parental leave and military leave—but it's also working to have the world's healthiest workforce by offering its employees access to programs and services that support personal well-being.

These efforts received special recognition today, when Johnson & Johnson was named to LinkedIn's Top Companies list, which honors the 50 most sought-after companies to work for nationwide—places where people want to not only work today, but stay into the future. 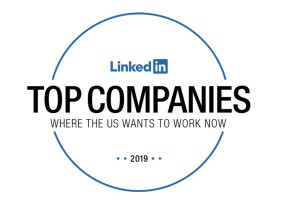 The Top Companies list was launched in 2016 to celebrate the organizations making an impact in the work world—and help LinkedIn users consider where they may want to land their next job.

To select the winners, LinkedIn measures the behavior of over a half-billion professionals on its site to give corporations a blended score, focused on four core areas: interest in a company, engagement with employees, job interest and retention. In essence, LinkedIn members cast a "vote" through their interactions on the site.

In addition to making the U.S. list this year, Johnson & Johnson is also proud to announce that it has been named to the Top Companies lists in Brazil, Japan and the UK.